October of 2017 brings a big change into my life. The is the second move in less than a year to a city I’m mostly unfamiliar with. Tiring, chaotic times, but I find eagerness for new possibilities also. During the 10 days after I moved in, when I was patiently waiting for a new provider to connect my internet and between settling and resting, I had time to contemplate my life, my plans and new vistas. It was a great time to focus on the creative flow and I used the time to dream Symbala dreams! Now that I have connection again, Iâ€™m eager to share one of the results both as a Symbala and some new awareness. This Symbala has a 7 base of the seeker and is full of the life force. There is a sense of rushing inward to find that place where we can connect, create and just BE. Iâ€™ve named it, â€˜The Way Inâ€™, and I wish you peace in its contemplation.

The Way In brightens many Symbala products (card, poster, magnet and medallion, etc.) in my Zazzle Store.Â  Don’t forget to check out the 8th Edition of the yearly Symbala Calendar, too.Â  The holidays are looming. 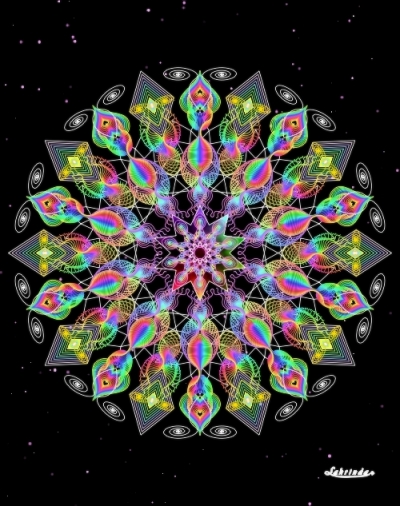 You may have noticed that the ‘Featured Symbala’ is a bit late this month.Â  I moved on the 2nd of this month and am still involved in the ‘Re-aligning’ process that always comes with a move, especially if it’s to another city, as well.Â  Challenges emerged immediately, not unusual for such a big undertaking; but I did not expect that the major one would be not having any internet connection for 11 days!Â  Now residing in Everett, WA, I have had a week and a half to do most of the physical re-aligning and the extra time gave me space to adjust my perspective and patience about the non-connectivity situation.Â  I may not have been on the internet, but I am still connected to the creative flow and have used the time for a great flurry of drawing new Symbalas and much editing, too.Â  The first new Symbala you see here; inspired by and devoted to the process it is named after.

Using a 10 base for the geometry reminded me that I was moving to a new level of alignment, as well.Â  Tens reduce to a one, but they are also about the double five.Â  So I am actively participating in the magic and chaos of being human in the physical dimension, and how!Â  At the same time I am adjusting to a new energy awareness as I sit on the balcony overlooking a beautiful and peaceful Beverly Lake with my new apartment-mate, Tina.

In addition, I am joining the smart phone world, too, all very new to me and with a huge learning curve.Â  Patience is all, sigh.Â  But I love the new connectivity as I venture, fumble-fingered, into the previously avoided experience of ‘texting’, acronyms and all (my inner English teacher is shuddering).

This move has called for great simplification of my life in many material ways because of less space, but letting go of things and past memory hooks and patterns is an excellent idea and long overdue!Â  On the third floor, I look out my window above my computer to see fluffly white clouds and very tall evergreen trees.Â  I feel so much lighter!

Featured Symbala of the Month, September 2017 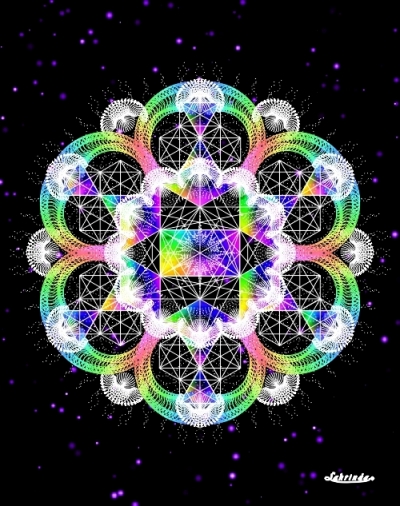 The day before the total solar eclipse (8/2017) I drew a Symbala about it (see previous blog entry). Watching the eclipse on TV inspired me to contemplate the constant recycling of forms so dramatically unfolding before my eyes. Sometimes nature and the earth’s cycles pass so gradually that we hardly notice, except when we see moments of beauty and grandeur. But how often do we use them to draw any philosophical observations about our own life. A total solar eclipse is so energetically charged and dramatic that it demands attention.

On the day, a personal situation paralleling the temporary disappearance of the sun was contributing to my contemplations. A family member is in the process of translating to another form and dimension. Even the family strain during this essential cycle is a reminder to appreciate deeply each moment as it passes in the divine process of life. Embracing this eternal ebb and flow, allows you awareness of the true ‘Luminosity’ of life.

About a week before, I was guided to draw a Symbala about this â€˜Luminosityâ€™. I didnâ€™t realize at the time how importantly the two events and Symbalas would be linked.

Luminosity shines from many Symbala products (card, poster, magnet and medallion, etc.) in my Zazzle Store.Â  Don’t forget to check out the 8th Edition of the yearly Symbala Calendar, too.Â  The holidays are looming.

See a larger image of the ‘Luminosity’ Symbala:
Featured Symbala of the Month, September 2017. 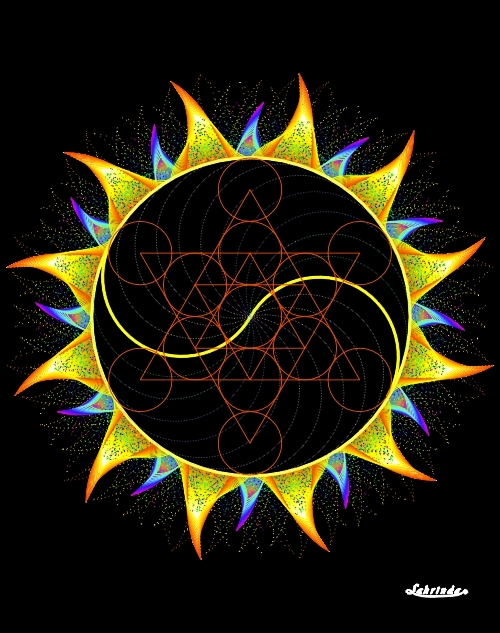 “The sign of Leo asks that we perform our emotions artistically, finding ways to express our unique admixture of emotions and experiences with talent and flair. No matter what you must face in the coming months, use this Solar Eclipse to adjust your attitude to something that you can remain inspired by. This in turn, will inspire others who need your strength and integrity.”Â  ~Â  Aeolian Heart

I am very fortunate to be in an area of the world that will have a 97% view of the total Solar Eclipse tomorrow.Â  As always my inner work in preparation for this stunning, high energy event comes through my guides encouraging me to draw a Symbala map for myself and also to share.Â  Celebrate outwardly and be peaceful within.

Posted by Lahrinda in General Stuff,Symbala Stuff,Thought Spirals from Lahrinda,What's New Comments Off on Total Solar Eclipse – August 2017
Welcome to the World of Symbalas!
Symbalas provide poetry and music for the eyes and a feast for the soul. Each Symbala is a focal point which can uplift and bring balance. The senses are immersed and energy is renewed. The experience can bring insight, transformation and a more conscious, centered and creative life.