Time For a JUBILEE! 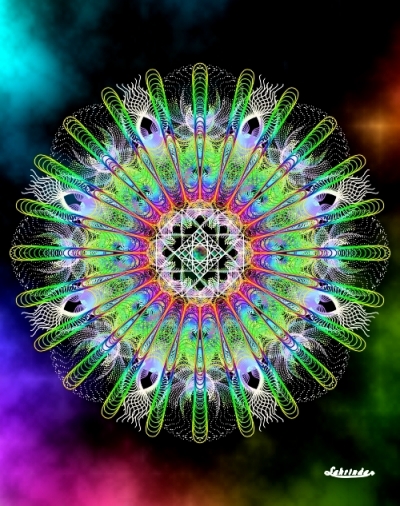 This has been my year of many moves, which have brought new insights about myself, new perceptions of our world and new skills (like learning how to quickly tear down and reassemble my computer, ha!). While it is temporary, too, I have found a safe harbor that truly resonates and the Symbalas keep coming. They will not be denied; no matter the abundance of external change.

In honor of the Yule Season and the fast approaching New Year, I present a Symbala of celebration. I named it, JUBILEE, which is an event or moment of extreme joy and celebration. Despite how the world may look right now, this Symbala was insistent with the forthcoming need for joyful celebration. Feel it shooting out from the center and embrace it. Pick your moment for great celebration and honor the Winter Solstice, too, with those you love!

Featured Symbala of the Month, November 2019 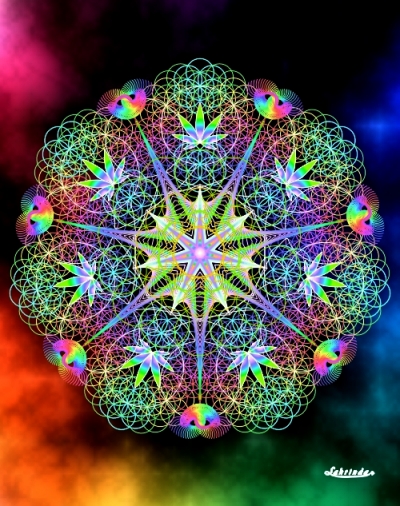 We all resist change; so how do we alter our perspectives about that concept. We all know change is inevitable, but how do we shift our resistance to welcome? I have had a lot of practice this year with that challenge because I’ve moved 4 times! Here’s how I’ve dealt with it; maybe some of it will resonate with you. After the second very unexpected move, rather than getting depressed or complaining I decided to shift my energies about the feeling of this change with a new Symbala, naming it, ‘Glorious Change’. This elevated the vibrational outlook of the whole concept of change to a new level of appreciation instead of resistance. Living in appreciation of each moment of your day is the key to welcoming changes of all kinds.

This helps one understand the glorious necessity of change. All things, from the cells of our bodies to the celestial motions of the cosmos are in constant movement, thus change. Without it, we would not be able to appreciate the seasonal changes, the daily changes from light to dark, the flow of the tides and the cycles of life itself!

The Symbala is structured with a ‘7’ base like the days of the week or the steps of a process. Change ripples through the expanding circles of life and the rainbow color echo of seven.

‘Glorious Change’ helped me a lot. May it reflect the stability of change for you amidst the seeming chaos of our world. Blessings.

See a larger image of the Glorious Change Symbala: Featured Symbala of the Month, November 2019.

Featured Symbala of the Month, October 2019 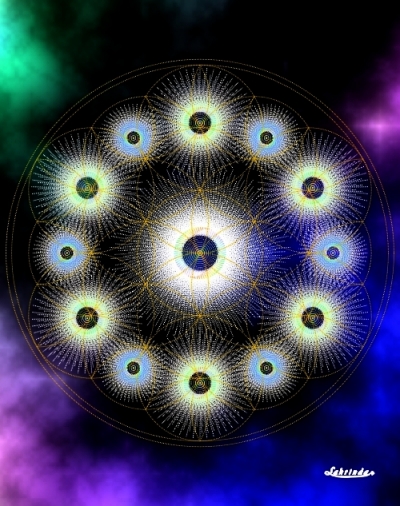 Pulsating swirl of rainbow quasars in the glories of the cosmos. We are all part of the flower of life network.

See a larger image of the Seeds of Light Symbala: Featured Symbala of the Month, October 2019.

Featured Symbala of the Month, September 2019

I recently introduced the ‘Infuse’ Symbala which carried an essentially outgoing flow. I realized there was a companion Symbala needed, which I have drawn, to complete the process resulting in an â€˜Infusionâ€™.

The verb/noun structure communicates a wholeness. Likewise, ‘Infuse’ and ‘Infusion’ together carry the energy of a completed process.

â€˜Infuseâ€™ is a verb describing the action or process of causing a medium (like water or a feeling) to be permeated with something else that alters it, usually for the better. â€˜Infusionâ€™ is a noun describing the resulting solution or state of being from this process. Infusions have been used as therapeutic tools for centuries as with: aromatherapy, essential oils and homeopathies.

Both Symbalas are structured similarly using an ‘8’ foundation for infinite holding and manifesting of form. The â€˜Infuseâ€™ Symbala expresses the strong directional energy of creating, while the â€˜Infusionâ€™ Symbala reflects an active solution that holds by retaining an up, down and spiraling energy within a ring of octagonal mandalas.

Since they are drawn with Sacred Geometry, the Golden Proportion and intention for the highest good, one of the important qualities of Symbalas is the broadcasting of increased frequencies. When we seek balance, awareness and transformation, we are raising our vibratory state to resonate with those states of being. It’s a short step to realize why I intend the Symbalas as therapeutic tools toward our inner and outer well-being.

See a larger image of the Infuse Symbala: Featured Symbala of the Month, September 2019.

Posted by Lahrinda in Featured Symbala of the Month,Symbala Stuff,What's New Comments Off on Featured Symbala of the Month, September 2019
Welcome to the World of Symbalas!
Symbalas provide poetry and music for the eyes and a feast for the soul. Each Symbala is a focal point which can uplift and bring balance. The senses are immersed and energy is renewed. The experience can bring insight, transformation and a more conscious, centered and creative life.