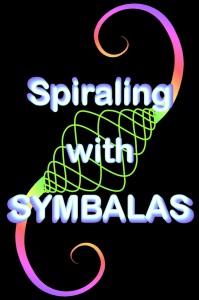 We are starting the New Year with some powerful astrological configurations.¬Ý I have a background in astrology, but am not a practicing astrologer.¬Ý I am a symbolist working from the level of vibration and resonance.¬Ý However, having a sun in Capricorn makes it hard to miss all the energies coming this way in that sign.¬Ý

Today heralds the New Year with a Lunar eclipse (Moon in Cancer opposite Sun in Capricorn, both squaring Saturn for good measure).¬Ý Looking at this configuration from my perspective reveals a beautiful isosceles triangle with a baseline of the parenting axis (Cancer – Capricorn and the Moon – Sun or¬Ýthe mother – father archetypes).¬Ý The peak of the triangle is anchored in the Saturnian realm of our perception of reality, which leads us to ask a serious question.¬Ý Are we parenting ourselves?¬Ý Are we truly integrating the mother/father axis and embracing ourselves and our view of others with a connected wholeness?¬Ý Are we releasing old stereotypes?¬Ý Are we able to see with the large golden eyes of a 10 foot tall, blue ‘Avatar’?¬Ý By the way, I recommend that movie from the depths of my being!

Let’s talk a bit more about this powerful triangle which is introducing our New Year, 2010, a ‘3’ year!¬Ý A triangle is the first form possible in geometry and embodies the creative principle.¬Ý So the question now becomes:¬Ý are we living our lives from a place of wholeness, immersed in the creativity of doing what we love and knowing that our passion is the key to universal resonance?¬Ý A powerful thought for a powerful New Year!¬Ý Speaking for myself, I say ‘YES’!¬Ý And I wish you a spiraling Symbala and Happy New Year!

Some Thoughts for Winter Solstice 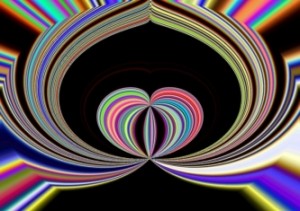 This heart image came from the World Gratitude website.¬Ý That site also shared some ‘heart’ thoughts which felt wonderful for this important day and time of the year.¬Ý Here¬Ýare¬Ý¬Ýsome ‘heartfelt’ insights from the perspective of quantum physics and dimensional geometry, delivered by my mentor, Dan Winter.

“You create a morphic body of living coherence magnetically and sonically in the Earth. Thereby you create a literal resonance information path to deliver the information from the human heart into the Earth’s grid and back. Sacred architecture would be in the language of biology’s morphic resonance and structural stability.

“This is not just a large galactic mouthful to swallow from a little data set which says human feelings shape the Earth’s field. This is what we all intuitively know in our own deeper heart. It is time to listen to the voice of our deep feelings from the heart. Learning

to self-manage our thoughts and emotions is automatically

“Earth grid engineering” and is not just saving the Earth; it is preserving our memory of the principle for making a collective and whole body, so that the planet Earth can take its true place in the universe, a planet of love and light.” 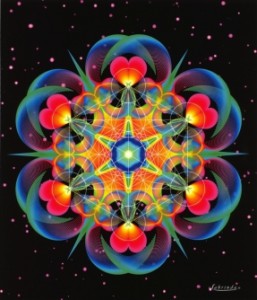 Lahrinda‚Äôs Heartfelt Symbala is simply and most eloquently it‚Äôs name.

In contemplation of this stunning creation, I was transported by its vibrant color and depth of design to a place deep within my own heart.¬Ý A sacred memory of love‚Äôs origin was renewed as a sweet knowing radiated through my body with pulsing tones of sacred geometry igniting this truth; We are One.

My experience with the Heartfelt Symbala left me with the understanding that Lahrinda has created yet another vision that could easily become part of anyone‚Äôs personal inner temple of devotion.¬Ý Like stain glassed windows sending a kaleidoscope of inspiration into chapels and cathedrals across the globe, the Heartfelt Symbala can bring you to the presence of divine creation and the spirit of love eternal each day of your life.¬Ý

I think we could all use a bit of heartfelt inspiration in our daily lives.¬Ý The Heartfelt Symbala is a powerful yet simple tool that bypasses the logic and linear side of the mind and speaks directly to the heart.

(Peggy is a new associate. Her training and background is in Energy Medicine and is now available for support and guidance for those of you who wish to discover more about the vibrational potential of the Symbala energy vortexes and how they can be used as a powerful tool to enhance your individual journey to self-awareness.¬Ý¬Ý More information available Here.)

Heartfelt¬Ýmakes a beautiful card and a unique magnet.¬Ý They’re both available¬Ý in my Zazzle store only a mouse-click away. Enjoy! 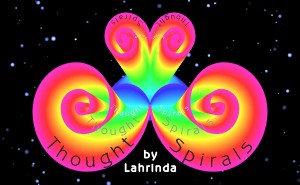 Busy season for sharing warmth with friends and family.¬Ý I shared Thanksgiving with my daughter and her husband.¬Ý That is not so unusual, but what was unusual was what we did before the big feast.

They had purchased 3 toy boats, 3 action figures, 3 rubber frogs and 3 rubber ducks and let it be known that we were going to have races!¬Ý

The night before the race we all decorated our boats with the stickers purchased for that purpose.¬Ý We also placed the action figures in the boats, which was a challenge since they weren‚Äôt made for that.¬Ý The purple boat was mine, the blue was Melea‚Äôs and the red belonged to Michael. 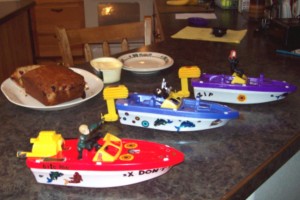 The next day after the turkey was in the oven we took our boats down to the course which Michael had laid out.¬Ý They have a seasonal slough that runs under their long and winding driveway.¬Ý He had laid boards over the creek so we could stand on them together and launch at the same time.¬Ý He also had a starting bar under the water and one at the finish, too.¬Ý He even had a stop-watch for time trials!¬Ý I couldn‚Äôt believe how much thought, effort and imagination they had put into it.¬Ý I couldn‚Äôt take a picture of all of us launching our boats at the same time so here I am just after launching my boat for the time trials. 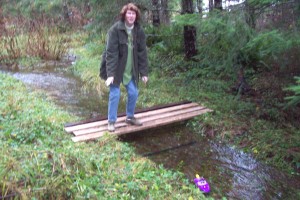 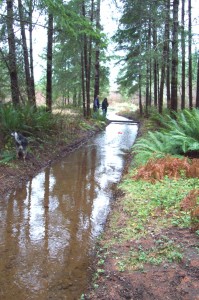 We also raced the frogs and the little Christmas decorated rubber ducks.¬Ý We had some initial difficulties convincing Yogi not to jump in after them! 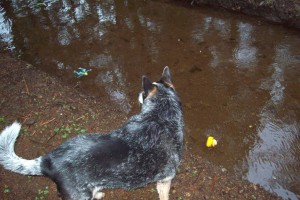 The whole thing was a riot of fun and laughter.¬Ý And later, back in the house full of delightful cooking aromas, I had one more surprise.¬Ý Melea and I didn‚Äôt know that Michael hid himself in the laundry room and spent more creative time to add to the celebration.¬Ý Here‚Äôs what he made from materials at hand.¬Ý These were mine and that‚Äôs Frank in the background. 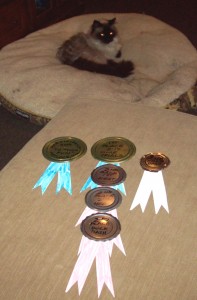 They were only can lids and paper, but I couldn‚Äôt have been more pleased when I was presented with my awards, including 2 firsts.¬Ý And then it was time for the feast! 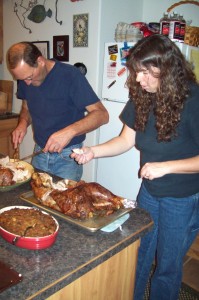 ¬ÝAll in all, it was one of the most delicious, fun and creative Thanksgivings we had ever shared.¬Ý Staying in the present in the creative flow is one of the foundations of my life and it‚Äôs so joyful to see those you love doing the same.¬Ý Let‚Äôs all enjoy the holidays remembering to keep a childlike perspective.

Posted by Lahrinda in Thought Spirals from Lahrinda Comments Off on Thanksgiving Boat Races!
Welcome to the World of Symbalas!
Symbalas provide poetry and music for the eyes and a feast for the soul. Each Symbala is a focal point which can uplift and bring balance. The senses are immersed and energy is renewed. The experience can bring insight, transformation and a more conscious, centered and creative life.